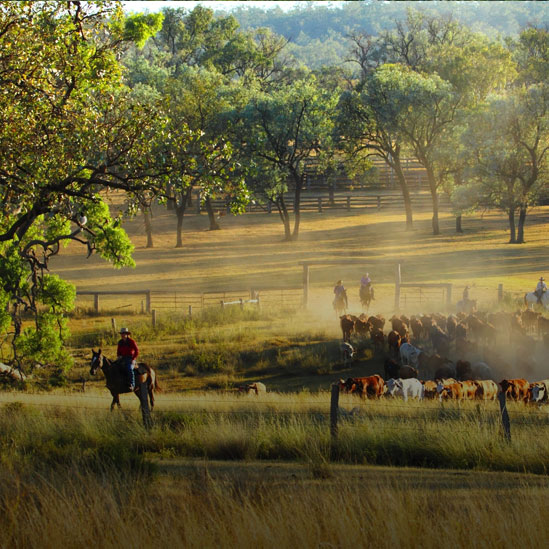 Horses & Cattle Australia partners with Australia’s best
horse people and stockmen in the most iconic locations. We
bring you the most authentic and unique on-station horse
experiences to release your potential and ride your dreams.

If you think that you have done all the horse
experiences the world has to offer, it is time
to think again.

We have curated experiences in destinations that offer deep immersion into Australian equine culture as well as the ability for you to personally encounter the unique and enriching Australian lifestyle.

The team behind Horses & Cattle Australia are passionate and committed horse people, on a personal quest to find rides and experiences not available anywhere else in the world.

Partnering with Australia’s leading experts in horsemanship and clinical practice, you will have real life immersions to work and live the Australian Horse & Cattle experience. 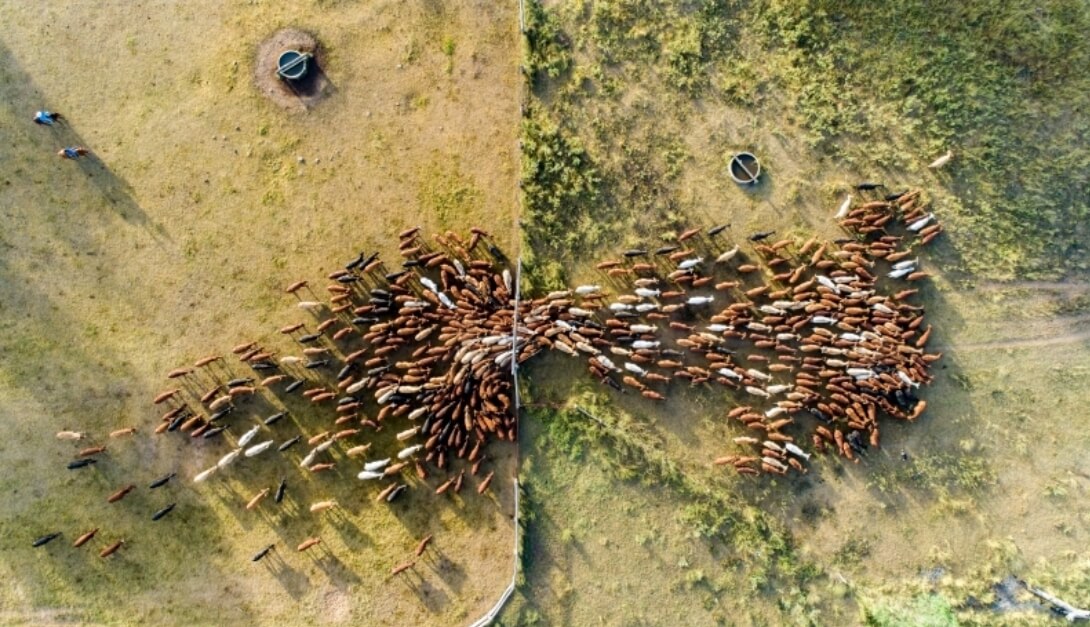 Our experiences are different. Our Australian horse experiences are unique, and they come to life by getting people immersed with the great wide land, the horses and its people and their culture.

Australia is a horse nation and we want you to get close to the best horsemen and horsewomen in the industry. We will also take you to unique places and Australian horse events, on a journey which is far beyond the tourist track.

Most of our experiences are ideal for individuals who want to participate in our adventures with a small group of like-minded people. To ensure a truly amazing experience, we rarely take more than six to eight people on our experiences. On some of our horse treks we restrict the number of participants to nine or a maximum of twelve.

We offer different types of curated Australian horse experience, each of them truly unique.

Our hosts will open their homes and their hearts to you and they will share their love for the Australian land, the horses and the cattle with you.

What is an authentic Cattle Station Experience?

– Guests experience and participate in authentic station work and life.

– Provides a personalised outdoor experience in a unique setting, where
guests can disconnect from their busy urban life and reconnect
with nature.

– Horses and horse riding are central to a true cattle station experience. Horses are ridden with a purpose to get work done and riders spend many hours in the saddle working cattle in the bush.

– Provides insights and learnings about unique Australian sports such as campdrafting and stockmen’s challenge and commemorates the Australian stockmen’s and women’s horsemanship skills.

– Comes with a story which is shared by the people who live on the farm.

– Brings together the best of personal and homelike country hospitality; accommodation and good family style cooking with regionally sourced food – a cold beer and glass of wine. 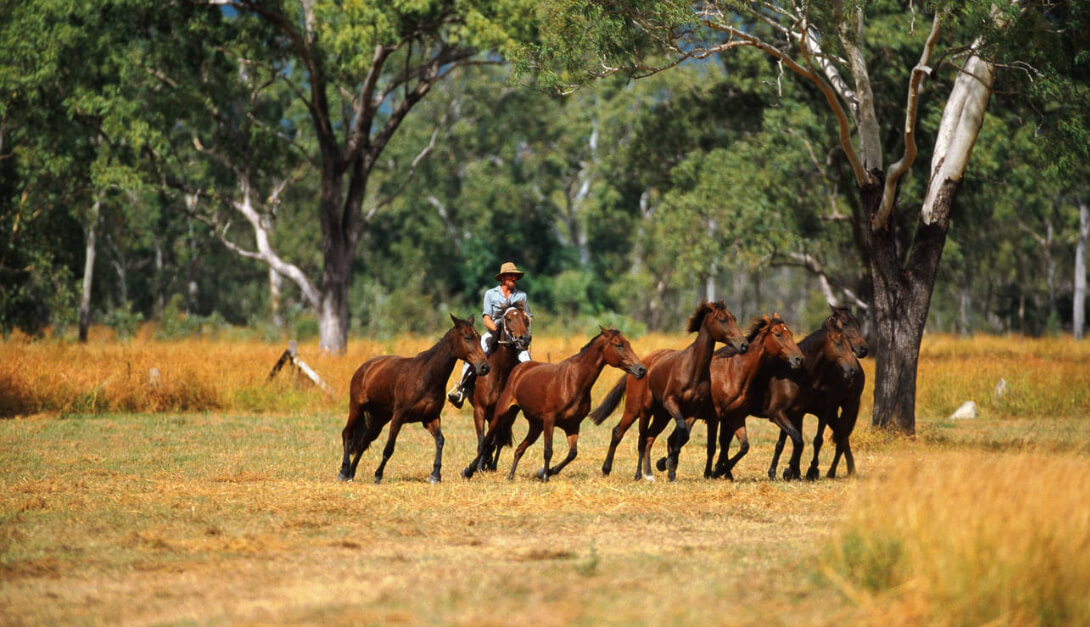 Some of our experiences center around your stay on a large cattle station, where guided by one of our expert stockman and trainer you will participate in every day life and work on a cattle station and you will learn what it means to develop and depend on a true partnership between you and your horse to get a job done.

We also offer some more leisurely experiences which bring you together with Australian farming families who will be sharing their life with you, their love and passion for the land, their horses and the cattle or sheep they breed and raise.

We do provide the opportunity to our guests to register for participation in horse clinics and training camps during their stay in Australia. We have a small and selected group of horses which we provide to our visitors from overseas so they can participate in these once of a lifetime training experiences with the best horse trainers, stockmen and country cattlemen Australia has to offer.

Whilst all of our experiences are truly unique, we understand that sometimes your schedule and holidays might not align with our experience calendar.

Our Signature experiences can be anything you desire and we can put it together for you as an individual or for your own family or group. We can also organise Signature Experiences around some of Australians great horse events and across a variety of equine disciplines and integrate them with your personal Australian holiday schedule and plan.

Give us a call and we will craft and design your own special experience.

Follow the drover’s trail and ride along rivers in the Kimberleys and experience vast landscapes, see crocodiles bathing in the sun on river embankments, or follow in the hoofsteps of the Man from Snowy River.

We bring you the most unique horse treks Australia has to offer. You will sit around the campfire, listen to the stories of the cattlemen and women, gaze at stars in the sky, and sleep in swags. Your horse will carry you across Australia.

Meet and ride the horses which are bred and trained to get a job done. These are possibly the world’s most versatile horses – many of them Australian Stock Horses, Quarter Horses and even some real Brumbies which you will meet and develop a deep connection with, a connection and a relationship which is truly unique.

Most of the horses on cattle stations are well trained cowhorses, many of them trained to do stockwork and draft cattle and many of them have been trained to excel in the iconic Australian sport of Campdrafting.

Campdrafting – a family sport rich in history and fuelled by passion

An Australian horse experience is not complete without an introduction to Campdrafting. Campdrafting is a unique Australian sport involving a horse and rider working cattle.

In a campdrafting competition, the aim for the rider of the competition is to cut a beast from a small mob in the camp, moving their horse among the cattle quietly and bring the chosen beast to a gate at the other end (front) of the (camp) yard, for a short time blocking the beast two or three times preventing it from returning to the mob. When the rider feels that control of the beast has been demonstrated to the judge, they call for the gate to be opened.

Once on the arena, the competitor is working against the clock (forty seconds) to guide the beast around two pegs in a figure of eight pattern, and then drive the beast between a final two pegs known as the gate. The best combination of control of the beast, riding skills, speed and completing the course scores the highest points. It is not unusual to see a beast gated in under twenty-five seconds, demonstrating the speed and agility of the specially trained horses.

The ability of the horses, combined with breathtaking horsemanship, makes campdrafting a sport for both competitors and spectators. The sport requires consummate skill and horsemanship. Great prestige is bestowed on the winning horse and rider of the competition.