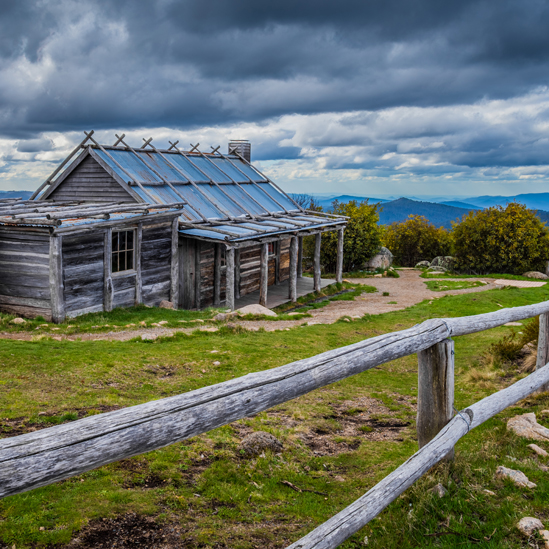 You will be heading up to the country town of Mansfield for this magnificent ride inspired by the legendary horsemen who once rounded up wild brumbies and the stockmen who drove cattle on this mountain terrain.

After having spent 4 – 6 hours in the saddle each day, you will set up camp under a blanket made out of stars or in one of the legendary mountain huts. After a nice hot shower (yes!) you will enjoy a great evening around the campfire and some great Aussie meals prepared in the campfire oven with a glass of that great Australian wine or a cold beer.

For our overseas visitors, may we suggest watch the legendary Australian “Man from Snowy River” movie before you embark on this adventure. As you ride through this magnificent countryside you will most probably recognize some of the spectacular scenery from the movie, such as Craig’s Hut, Mt Lovick, Mt Cobbler (the Sleeping Indian) the King Billy Tree and so much more.

This ride offers so much, the views across the Great Dividing Range, majestic Mountain Ash, Snow Gums, native wildlife and wild flowers, through to ever changing river crossings that cut their paths from the spectacular mountains into the rolling hills and then ride along the stock routes, farming flats of the Valleys. And it all comes with that famous Australian country hospitality and people who will make you feel so welcome that you never want to leave.

Day 1 Arrival
Guests arrive in Mansfield in the late afternoon before the ride and will spend the night in a local hotel. Enjoy a traditional Australian pub meal at the local hangout and meet your fellow riders. Your guides will join you for dinner and you will get a full briefing on the great adventure that lies ahead of you.

Day 2
Your guides will pick you up at the hotel in the early morning before you drive out to meet your horse and equine companion for this adventure. Saddle up and we will make our way, meandering through Mountain Ash (Woollybutts) along the snow trails and over the top of Mt Stirling, onto the Clear Hills track before arriving and being taken aback by the picturesque 360-degree mountain views from Craig’s Hut as seen in the Man from Snowy River movies. After lunch we get back in the saddle and make our way through the twisted snow gums back down on to the head waters of the Howqua River passing Bindaree Falls. We then continue down to the mighty Howqua river where we set up camp under the stars. For those that like to fish feel free to pack the fishing rod, Paul will show you where to catch a trout or two!

DAY 3
After a hearty breakfast, we saddle up and start our ascent back into the High Country climbing up through the majestic mountain ash gums and onto the snow gums, underneath the Bluff and onto the Bluff hut, famous cattle hut of the Stoney family. We then continue our journey along the top and around the south side of Mt Lovick which was named in honour of Paul’s great uncle Frank Lovick. We will stop to take in the spectacular view before we then ride to Lovick’s Hut where we will set up our camp for two nights. This family hut was originally built by Paul’s grandfather Jack back in the 1960’s and it has since been rebuilt by the Lovick family and friends. Sitting around the campfire, be prepared to listen to some bush poetry and great cattlemen stories.

Day 4
Today will be a ride of many river crossings and sections of the High Track with amazing views looking down onto the river. Throughout the day you will be taking in in the sights and feeling like you are transported back into the Snowy River movie scenes such as Helicopter Spur, Picture Point and the famous King Billy tree. We will arrive at the famous Lovick’s Hut which is nestled in a little saddle between Mt Lovick and the King Billy’s. In the afternoon there will still be some time to kick back and relax and enjoy the mountain views. Once you return to the camp, the campfire will be well under way and Kay will be waiting for you with one of her beautiful Aussie roast dinners.

Day 5
On leaving Lovick’s Hut, we then ride back down through the snow gums and mountain ash where we will be staying on the Howqua River at Pike’s Flat. A lovely secluded spot where you can go for a dip in the river. On our way, we will Endeavor to point out the local wildlife. Kangaroos and Koalas along with the beautiful birds. We will have another roaring fire to sit around in the evening and chat about our adventures.

Day 6
From here we will be back in the river country where we will follow the course of the magnificent Howqua River along the river tracks and back onto Sheepyard flats. Here you will see some lovely bush huts. The river country is lovely for meandering canters along the trails or just a relaxed walk. Tonight’s camp will be set up on a lovely bush block in the Howqua Valley.

Day 7
We will pack up camp and then head up and out of the Howqua valley passing through Timbertop Saddle and along Three Chain track to the old stock routes and into the beautiful Merrijig Valley. On the way we can stop in at the ‘local watering hole’ (the pub) for a well-earned beer or cold beverage! And of course, for those that have time to stay on (at your own expense), we can head to the Hunt Club Merrijig pub for dinner (at your own expense) where you can relax and reminisce on all the wonderful sights, sounds and stories after your adventure. 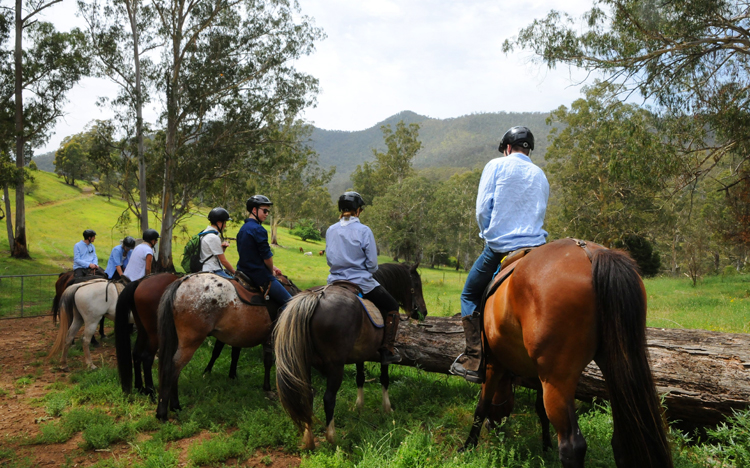 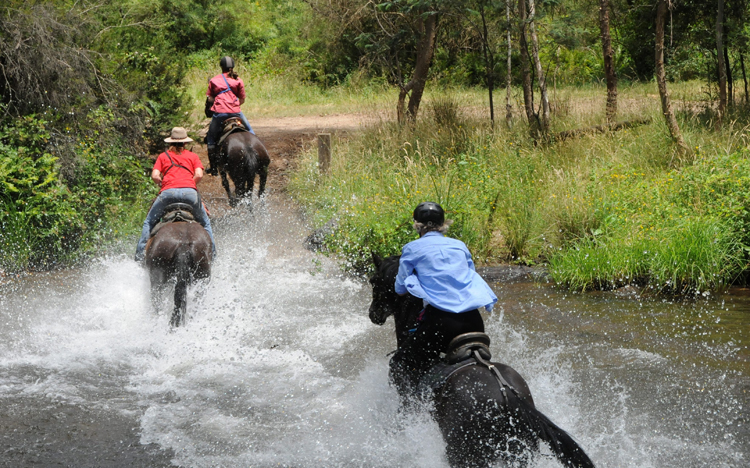 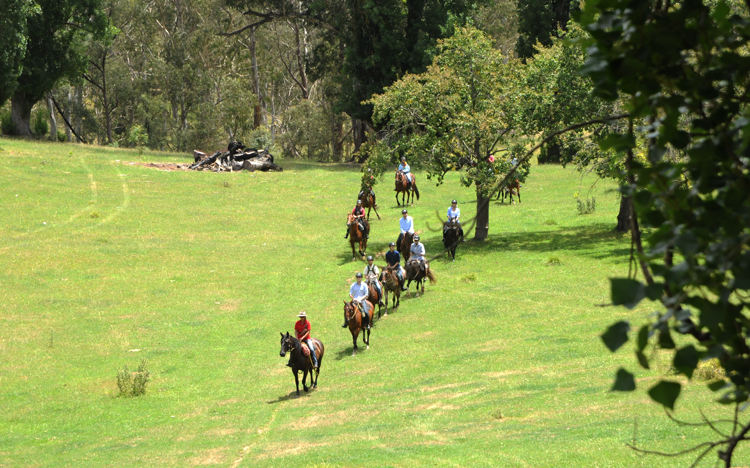 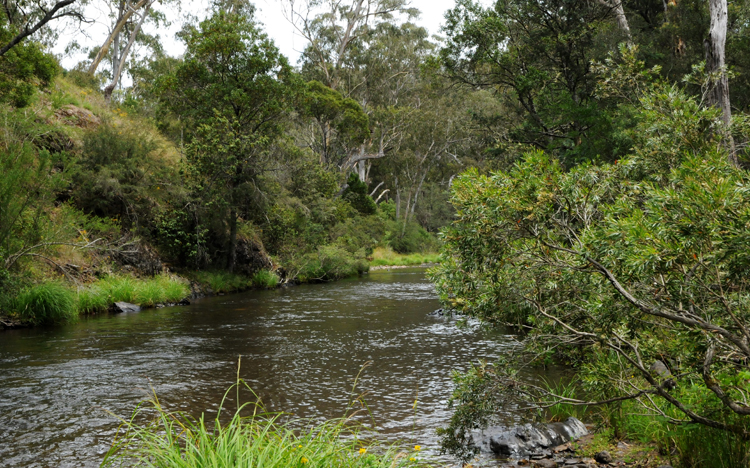 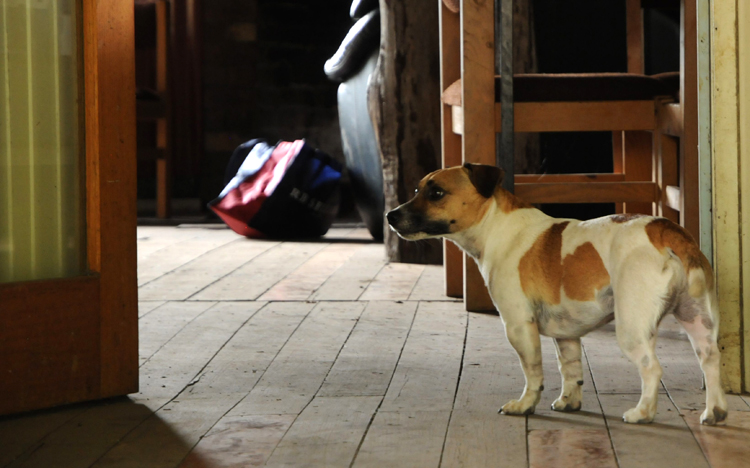 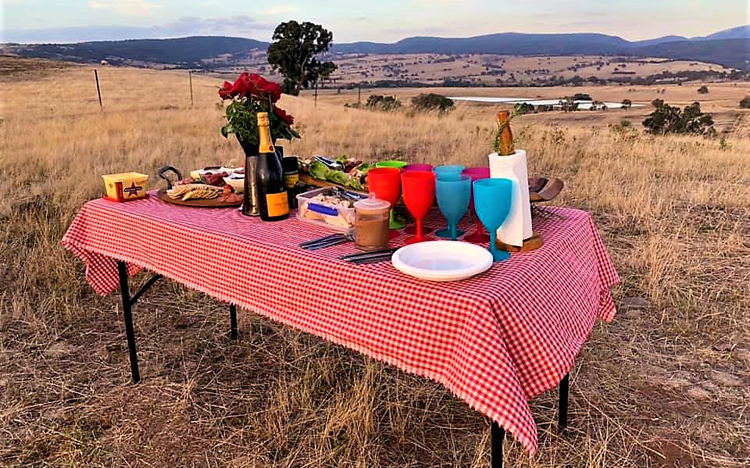 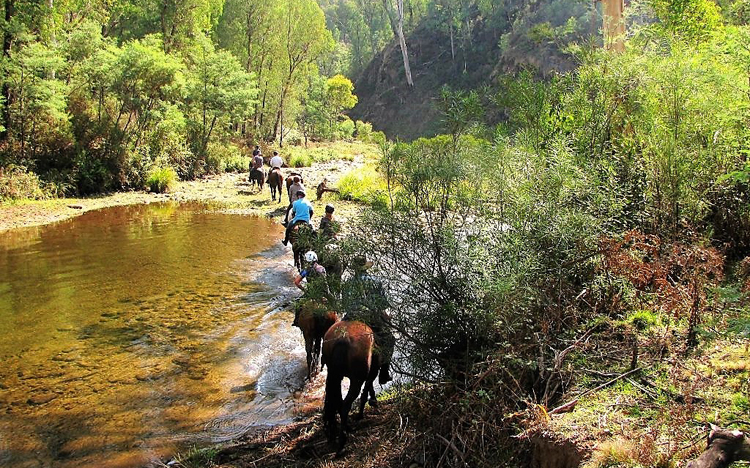 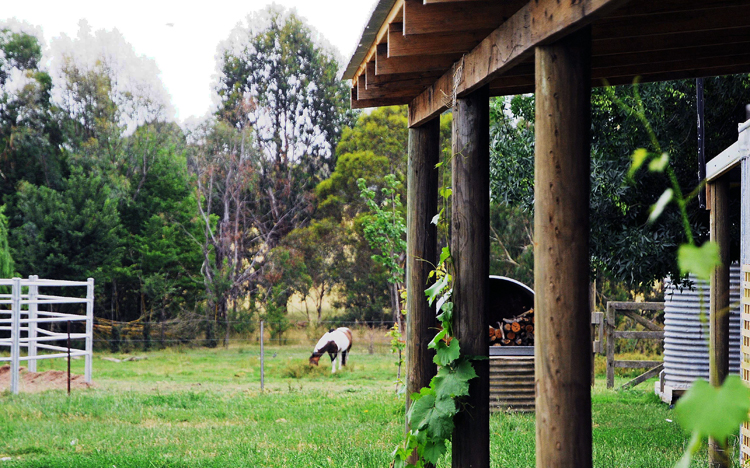 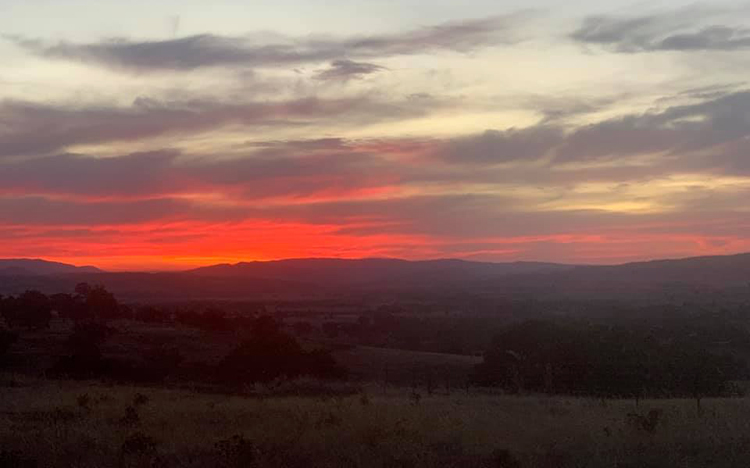 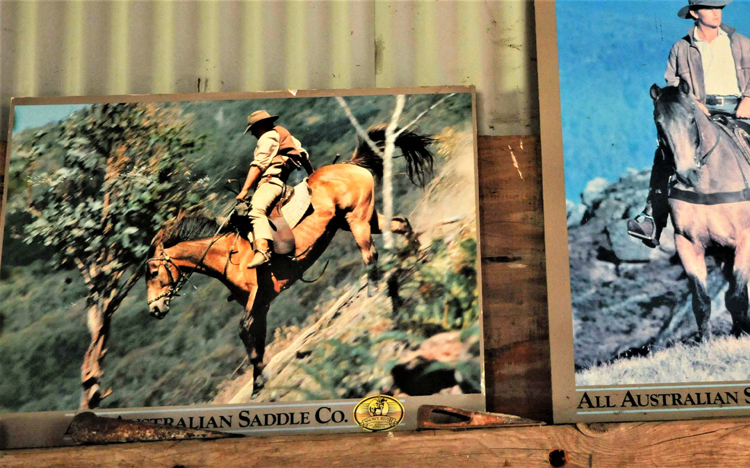 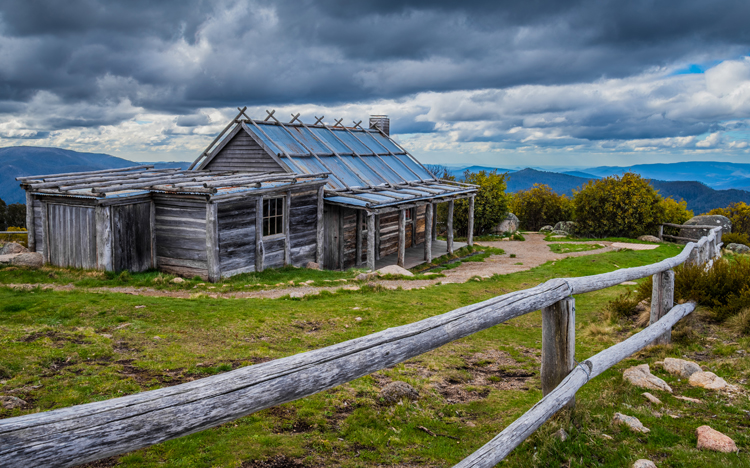 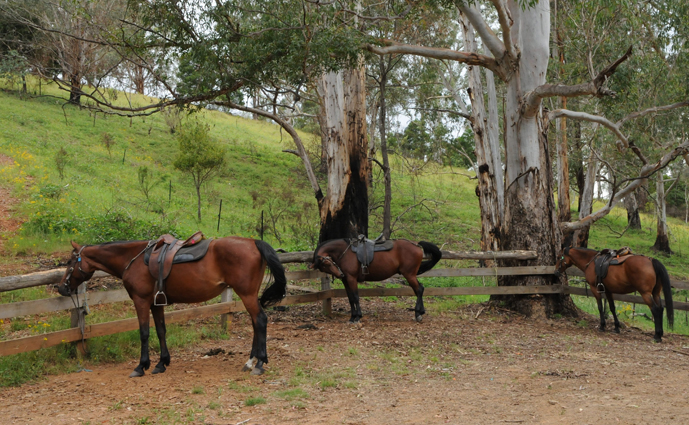 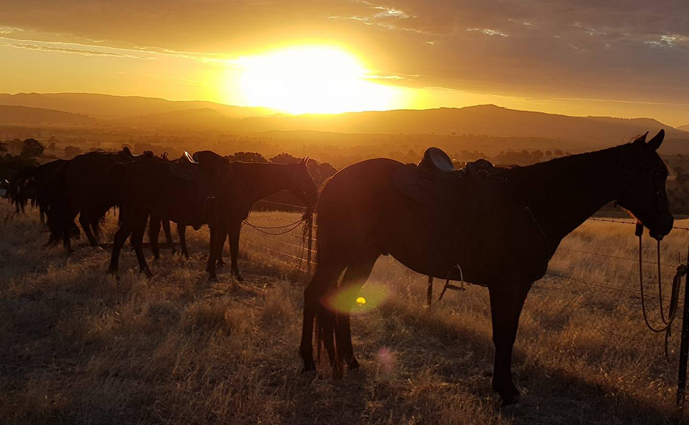 Shelly and Paul have a herd of about 30 well trained, beautiful horses who will be waiting for you. Their horses have excellent temperaments and they are fit and sure footed for this type of terrain. They pride themselves on their ability to match each rider to the right horse, which will make this adventure even more enjoyable not just for you but for the horse as well. 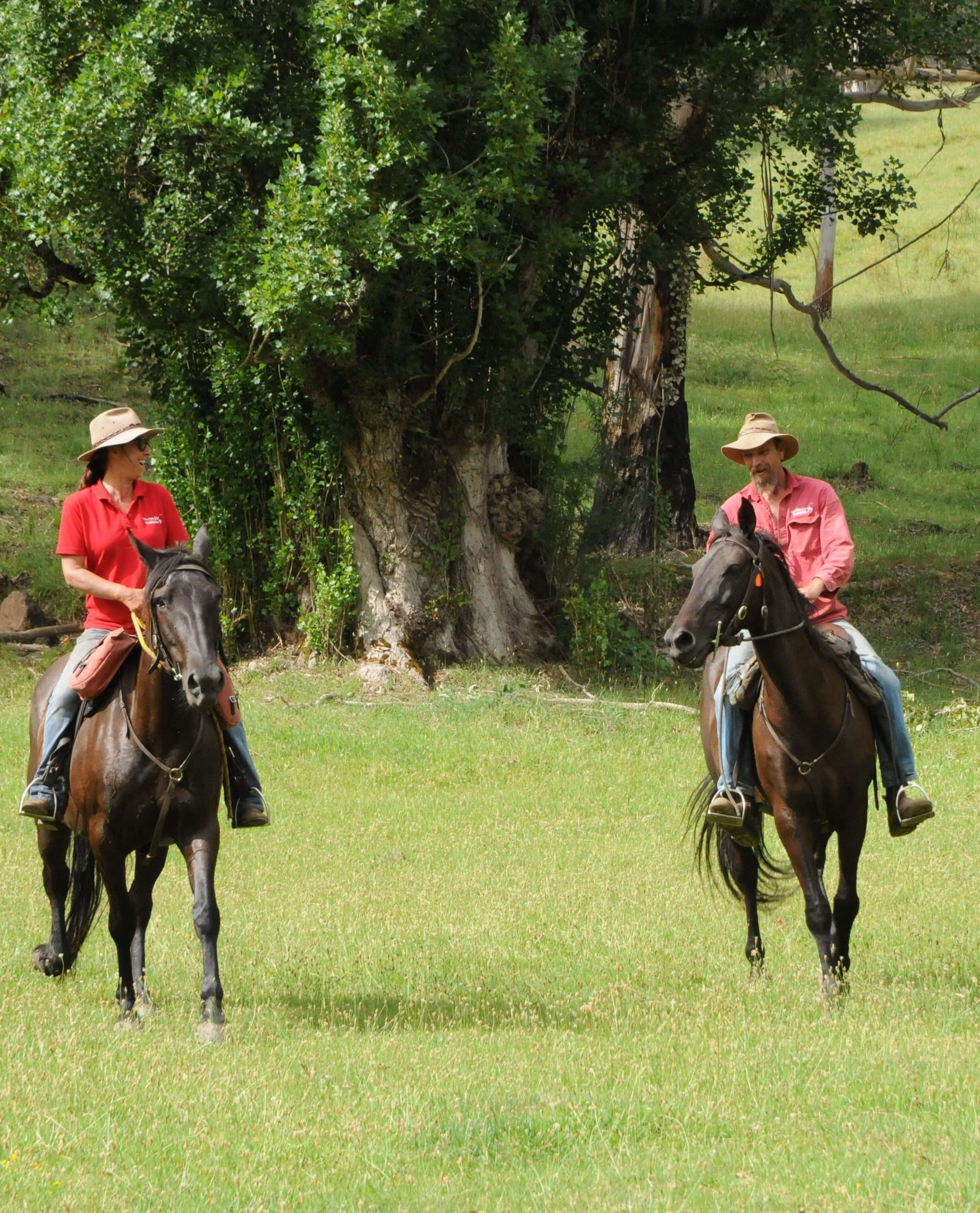 With a long family history of horse riding in and around the High Country, Paul and Shelly have been mastering the art of capturing the spirit of the legendary cattlemen which have called the Victorian High Country their home for generations in their unique horse experiences.

Transfer:
Transfer to and from Mansfield from Melbourne can be arranged for an extra fee of AUD 150 per trip.