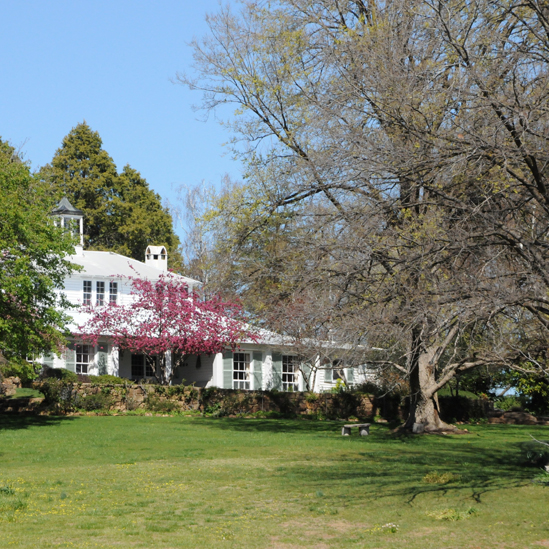 Located on the Southern Tablelands of New South Wales, Markdale offers an out-of-the ordinary experience to fire up the senses of horse enthusiasts. Once you drive through the gates you are about to immerse yourself in station life on one of Australia’s most historic sheep stations located in the beautiful New South Wales Southern Tablelands.
Markdale is rich in history and impresses with some of Australia’s great equestrian sports pasts. This is where James Ashton, father of Australia’s first polo team settled in 1920 which marked the beginning of polo in Australia. His sons, the Ashton brothers team rose to dominate Australian polo and the film ‘The Four Horsemen’ tells the story of their adventurous and successful voyage – with their 25 polo ponies – to play polo during the 1930 English season. From England, the brothers proceeded to New York to play a series of exhibition matches in the hope of selling their polo ponies.
Today the property continues to be a fully operational sheep station with over 8,500 fine merino sheep and some cattle and there are 6300 acres of beautiful horse riding country, just waiting to be explored on horseback
Once you get ready for your morning ride, you will continue to be surrounded by equestrian history as you pass by the famous Ashton brothers polo hitting pit and once you are on horseback you will have the opportunity to ride on the original polo field before you start exploring 6300 acres of riding country which can only be described as an equestrian’s dream.
There is also an abundance of activities to be enjoyed at Markdale beyond horse riding. The beautiful Edna Walling Garden with the pastoral homestead are a magical haven to relax after a long day in the saddle and if you still want to be active, there is a beautiful tennis court and a heated pool waiting for you to be enjoyed.
Our group will be staying in rustic accommodation, double and twin rooms in the two refurbished original stone cottages and in the historic shearer’s quarters, built in the 1850s. In the morning you will wake up with the sun and after a nice evening meal you will spend your evenings relaxing in the courtyard or by the log fire.

Day 1 Arrival
Arrive at Markdale mid-afternoon and get settled in the historic stone cottage. Take a stroll around the area and get a glimpse of the beautiful countryside which you will be exploring on horseback during the coming days. Explore the beautiful Edna Walling Gardens and visit the historic polo hitting pit where the Ashton brothers used to practice their polo game. Depending on the season you might want to cool off in the pool or play a game of tennis before dinner. When you hear the dinner bell it will be time to get back to the cottage for dinner and meet up with your guides and fellow riders for the week.

Day 2
Following a hearty country breakfast you will get the horses ready for the day. Once saddled up, you will have a chance to ride around the historic polo field and get acquainted with the area and if  you ride one of our horses you will also get to know your equine companion for the weekend. After lunch, you will ride out and meet some sheep and cattle on the way. Once back at the quarters, a cold beer, a glass of white wine and nibbles followed by another example of great Australian home style cooking will be waiting for you – to be enjoyed with a couple of glasses of that great Australian Shiraz.

Day 3
Following breakfast, get ready for a day in the saddle. We will start the morning with an intro to horsemanship and you will develop your skills by working with cattle props on the polo field. The afternoon will be reserved for you to enjoy and explore this beautiful country on horseback. Upon your return a shower to wash off the sweat and dust after a day in the saddle before you enjoy some nibbles with a glass of sparkling on the veranda followed by a dinner around the campfire. Weather permitting we will also go on a sunset ride in the evening. And don’t forget to take some time out for yourself before you go to bed to gaze at the stars before you retire to your comfortable quarters for a good night’s rest. Australian starry nights are to die for!

Day 4
Get up early and get ready for an action packed day filled with all types of station activities and work. Your ride will take you to various areas of the station where you will check fences, dam levels and water troughs. You will have a picnic lunch out in the paddock and if you are lucky you can have a snooze under the beautiful gumtrees before you continue your work and your ride in the afternoon and meet some sheep and cattle on the way. Back at the station there might be some time to enjoy another swim in the pool or to hit some balls on the tennis court. Depending on the weather, we will take you for a sunset ride. One of these great Aussie barbies (Aussie lingo for barbecue) will be waiting for you in the evening with some Aussie lamb and beef to be enjoyed! Sit around the campfire and listen to some bush poetry and have a bit of a yarn.

Day 5 Departure
Take in the view from the breakfast table and then it’s time to say goodbye and take with you what’s for you alone to keep which are all of these great memories to be cherished forever! 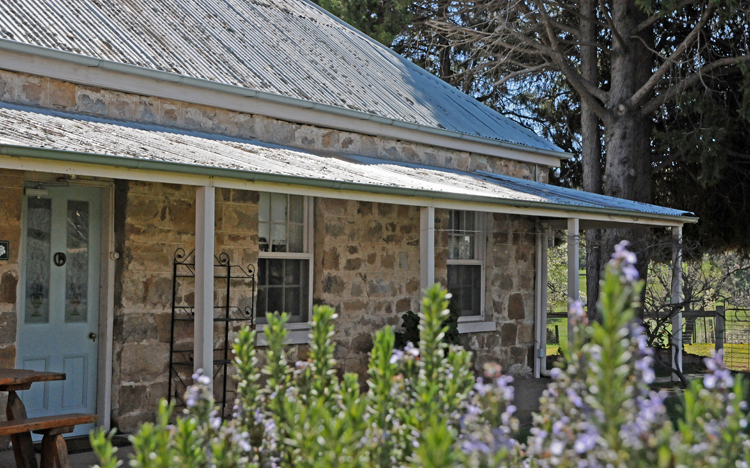 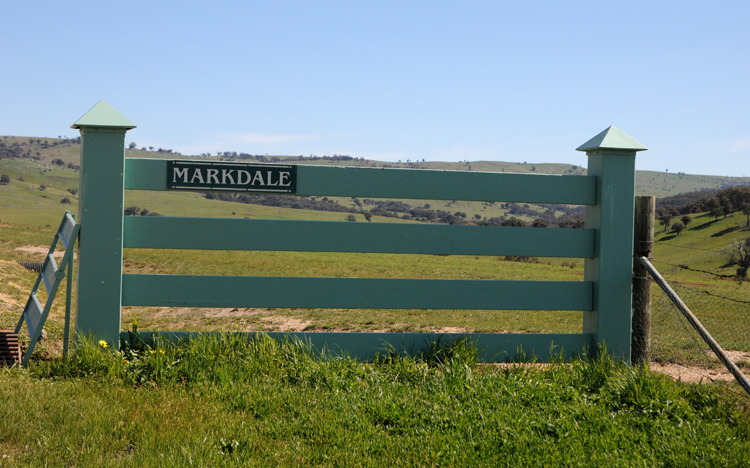 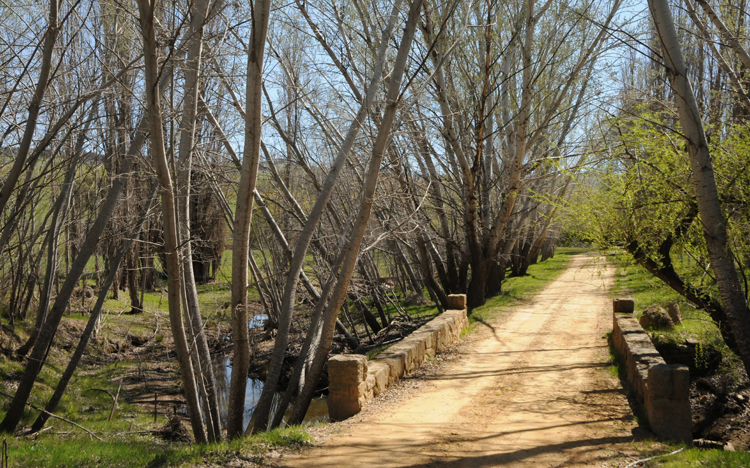 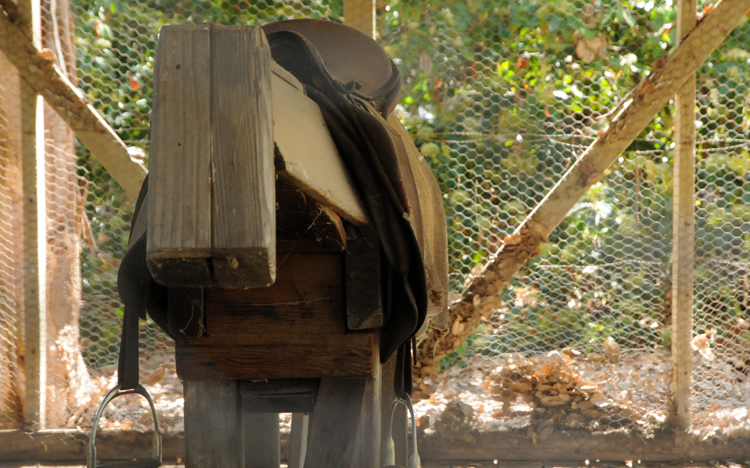 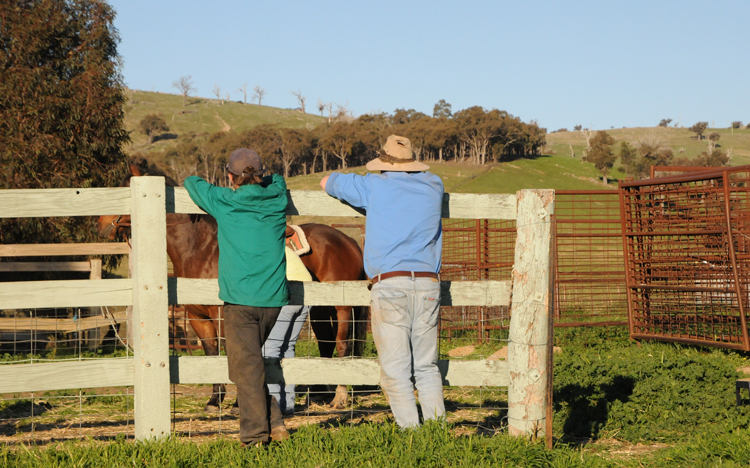 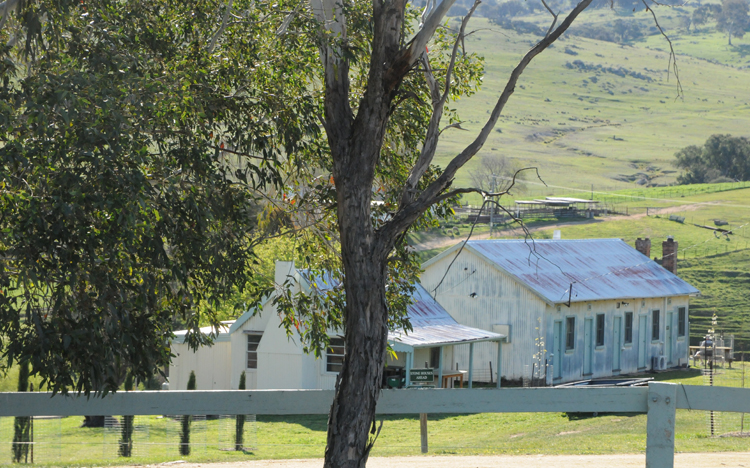 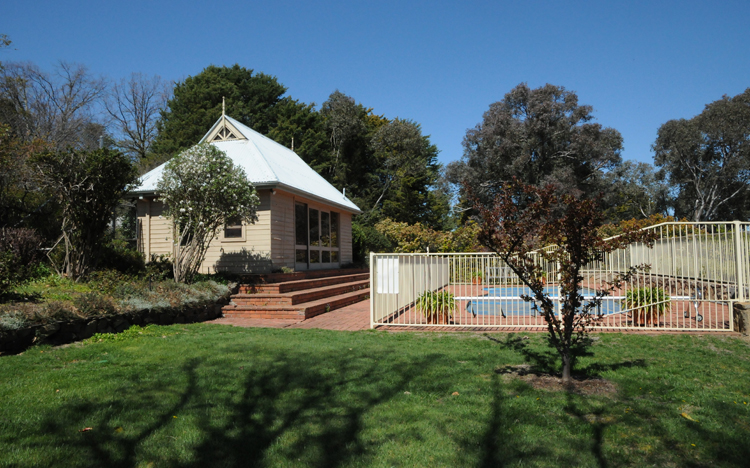 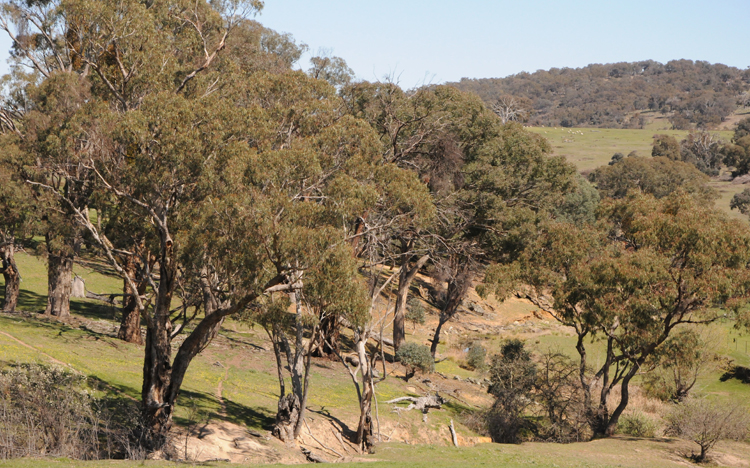 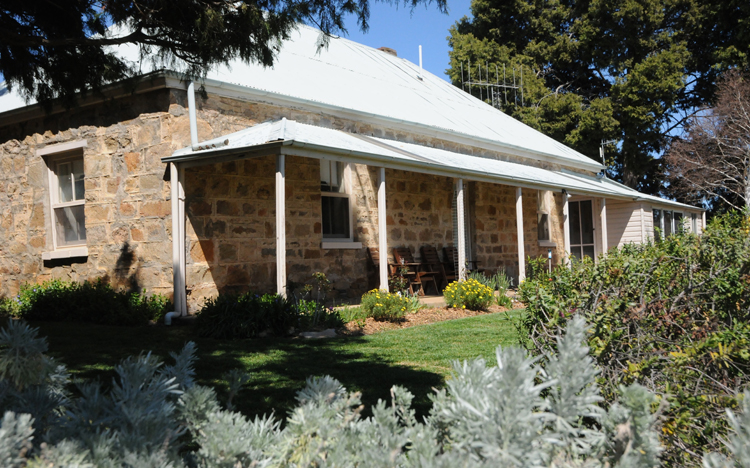 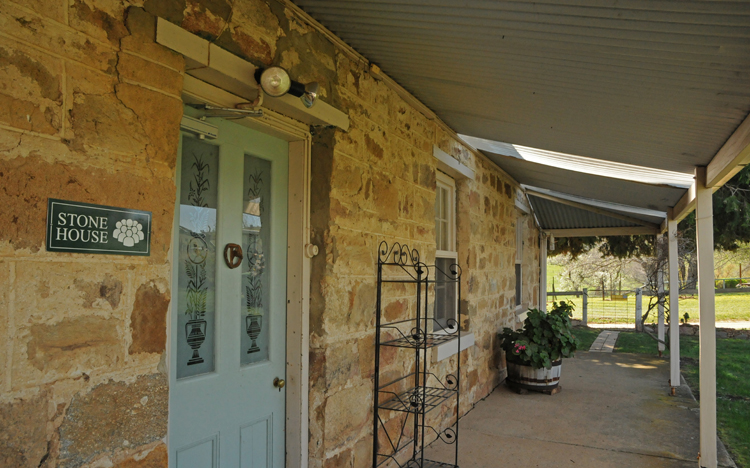 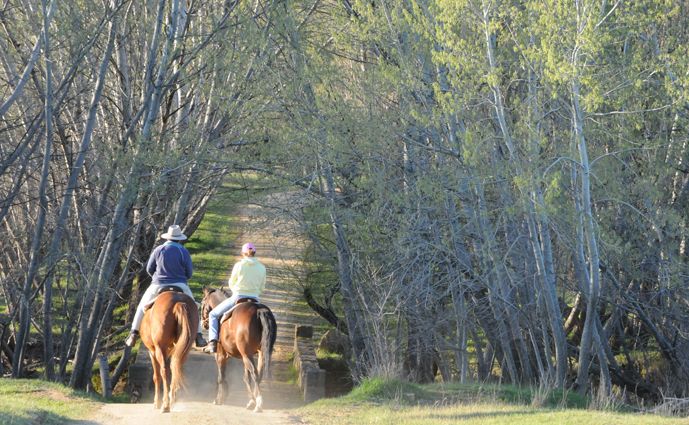 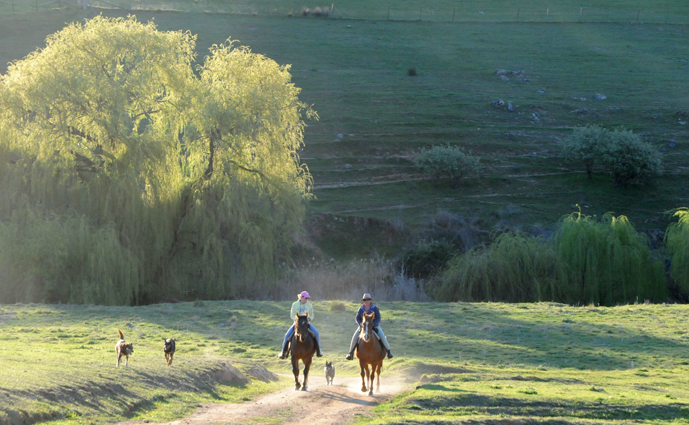 You will be riding different breeds of pleasure horses - or even a brumby - all of them well trained. You can bring your own horse to this experience on selected dates. 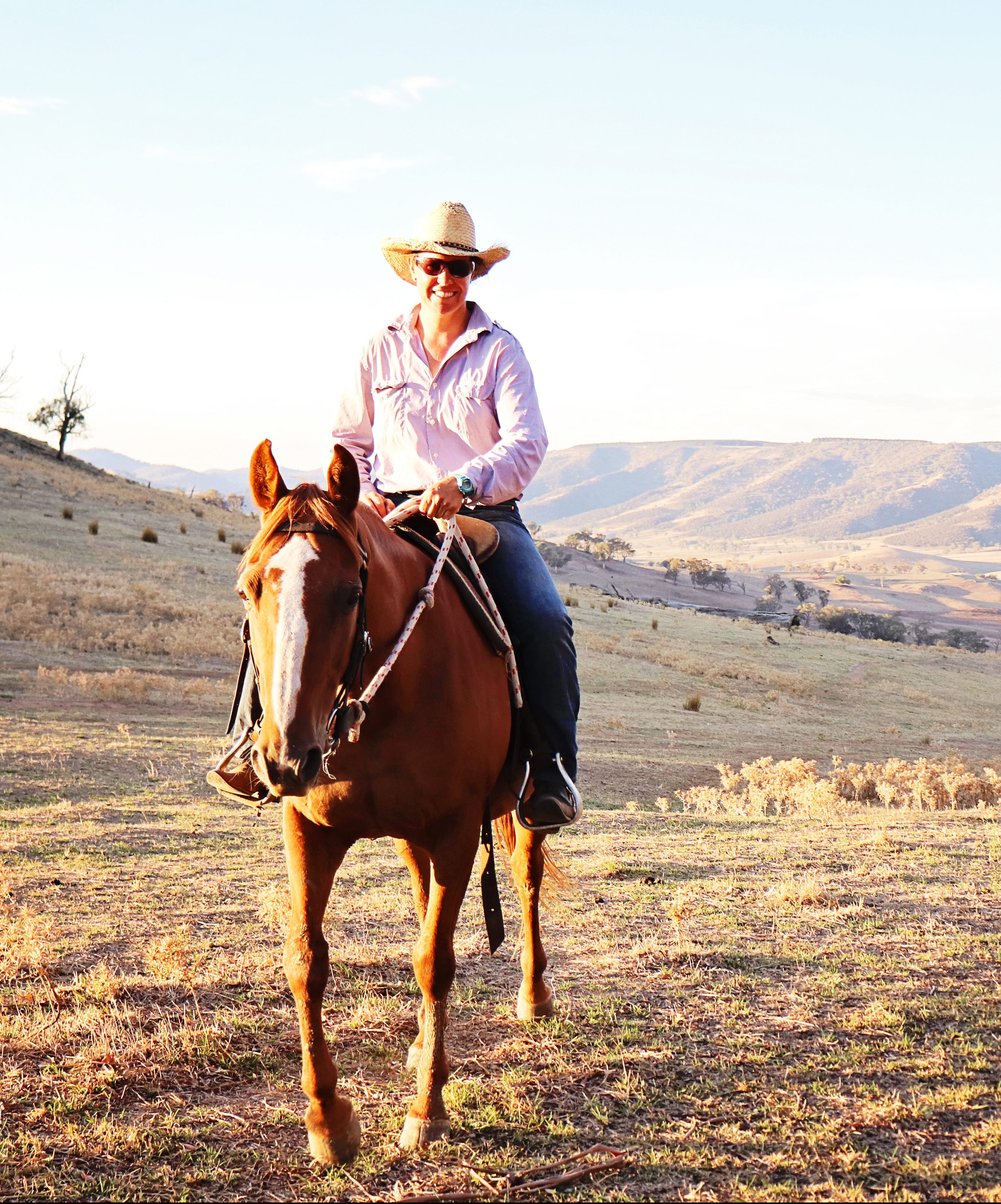 Join a great Australian horsewoman, campdrafter and farmer for a very special farm and horse riding experience where she shares her passion and love for the land, for the horses and for this beautiful part of the country she calls her own.

With your own car or by rental car from at your own expense from Canberra (90 mins), Sydney (3 hours) or Melbourne (7 hours)

BYOH - Experienced and advanced riders can join this event with their own horse on selected dates. You will pay slightly less if you BYOH (Bring Your Own Horse). The price includes an overnight yard (tape fencing) for your horse. You will need to bring your own gear, feed and hay.