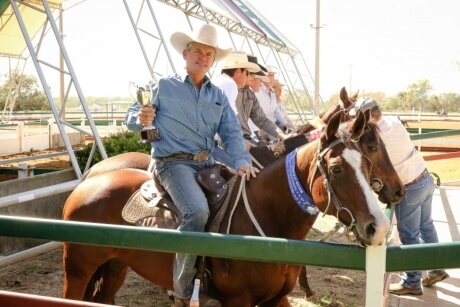 A lifetime of passion, commitment and determination has enabled Pete to become one of the most accomplished competitors in Campdrafting over the past thirty years. He was just eight years old when his love for campdrafting began.

Born in Rockhampton, Pete’s focus has always revolved around his family, his property, his cattle his horses and campdrafting. He grew up as a farm kid on idyllic cattle station near Capella and he has consistently and very successfully campdrafted since he was eight years old. Forty years and 22 national open rider titles later, Australian competitor Pete Comiskey’s love affair with the sport is as strong as it ever was.

Being one of the most successful competitors in history in this uniquely Australian sport to date, Pete has been decorated with so many campdraft title wins it’s hard to keep track of all of them. The central Queenslander’s achievements in the unique Australian sport are unmatched, and his passion has continued to grow alongside his achievements throughout the last four decades.

He has won the ACA Open Rider Series 22 times and also took home the prestigious Warwick Gold, Charter Towers and Paradise Lagoons Acton Super Beef/Mort & Co Open, Clermont Gold Cups more than once, just to name a few. It was only earlier this year the campdrafter won his biggest purse yet; $100,000 at the Willinga Park World Championship Gold Buckle Campdraft in New South Wales. 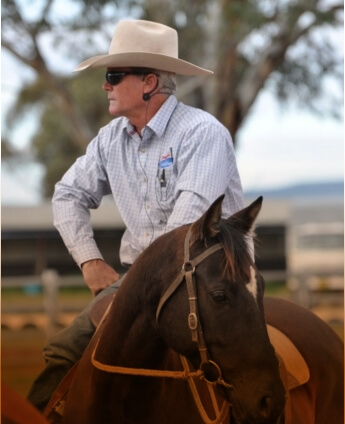 With his clinics and campdrafting schools, Pete is giving back to the sport and making a contribution to taking the sport to a new level. He makes himself available to do clinics whenever he can and four years ago he was selected to head up the Australian delegation who took the campdrafting sport to the USA, holding some schools and judges clinics and the USA first affiliated campdraft.

He is now opening his home and he will be sharing his passion and extending these unique training opportunities to a very small selected group of guests and riders from overseas.

Through the years of following his passion, Pete has developed a unique Campdraft and Australian Stockmanship training program which has assisted him throughout his impressive career.

Spending time with Pete and his family on Westpoint Station will introduce you how horses are bred, kept and trained on a cattle station and how that training leads into developing them into true high performance campdraft horses.
If you pick the right time, you will also have the unique opportunity to participate in one of Pete’s clinics and campdraft schools and you will experience first hand what it means to learn from the best and most successful Australian campdraft champion to date.

Together with his partner Bryony and his two young children, Pete travels the country competing and running clinics but he always enjoys coming back to his personal training ground and home at Westpoint station. This is where he enjoys and cherishes the time he spends with his whole family and friends which truly energizes him to achieve new heights to maintain his unbeaten record.

Train and Ride with the Best

Choose to be the best you can be. Follow in the hoofsteps of a legend and participate in a Pete Comiskey Campdraft School.